Embark on a Fall Foliage Road Trip Through New York, Vermont and More

THE BEGINNING OF AUTUMN in America offers a time to savor the last precious moments of summer against the countryside’s mosaic of reds, yellows, oranges and purples. Before long, the chill of winter will enter the air and the trees will grow barren. This is not news to most of us. Indeed, leaf peeping has become ubiquitous. Most states have 24-hour toll-free hotlines to keep you informed of nature’s progress … and then there’s the traffic. It seems the entire population of New York City and Boston climbs behind the wheels of cars on congested New England roadways. Thus we’ve tried to avoid the mainstream routes so you can truly appreciate the kaleidoscopic splendor. After all, a fall foliage road trip provides more than a mere drive. It also incorporates picking apples, tasting cider and hot doughnuts and leaving your vehicle behind to take a much-needed scenic walk to a lonely waterfall, where autumn’s colors reflect off the water. 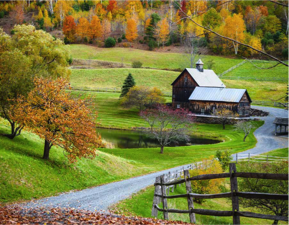 DON’T BELIEVE THE VERMONT fall foliage hype? All it takes is one drive on Route 100 from Killington to Stowe to understand the allure. Traveling in a valley paralleling the ridgeline of the 4,000-foot-high Green Mountains, which radiate with a verdant dress of multihued maples, you can’t help but sing its praises. Be sure to stop in the farming community of Rochester for the requisite “cows and meadow” photo and the historic village of Stowe to find one of the numerous freshly painted white steeples. Along the route you’ll want to visit Cold Hollow Cider Mill for your jug of cider, out-of-the-oven cinnamon doughnuts and genuine maple syrup. Nearby lies the Ben & Jerry’s Factory where you can take a tour, sample the wares and find out how the duo started their celebrated business.

AUTUMN IN THE FINGER LAKES of western New York state is the time of year when leaves on the maples turn a tad crimson and the grapes on the vines are ready to be harvested for the region’s award-winning Rieslings. Start on the northern tip of Keuka Lake in the town of Penn Yan. Head south on Route 54A, and just outside of town you’ll see signs for Apple Barrel Orchards, a third-generation, you-pick apple orchard that makes homemade cider on premises. Continue south along the shores of the 20-mile-long lake to reach Dr. Konstantin Frank Winery. Founded in 1962 and now run by Dr. Frank’s grandson, Fred, Dr. Frank put the Finger Lakes on the wine lovers’ map with his award-winning dry and semi-dry Rieslings.

DRIVE THE FAMOUS 105-MILE SKYLINE DRIVE atop the spine of the Blue Ridge Mountains and you’ll view this idyllic mix of water, valley and peaks. Especially stunning in autumn, maroon ash, orange beech and scarlet dogwood trees show off vivid colors. Start in the north off the I-66 freeway and get ready to drive at a 35-mph speed limit. You can’t go wrong with any of the 75 pull-offs, but you should not miss the panoramic vista of mountains and mist found at Range View (milepost 17.1). At milepost 32.4 drive through Mary’s Rock Tunnel, a 13-foot bore cut through the granite in 1932. If you need to stretch your legs and go for a hike, Big Meadows (mile- post 51) offers two enticing hikes. A 1.4-mile round-trip hike leads to Dark Hollow Falls, a 70-foot-tall frothy cascade. It’s the shortest hike to a waterfall in Shenandoah. The Story of the Forest trail offers an easier 1.8-mile circuit leading through woods ripe with fall color.

ONE OF THE PRETTIEST DRIVES IN MICHIGAN travels north of Traverse City on M 22 to the northern tip of Leelanau Peninsula. Slow down and explore the region on this 75-mile loop where you’ll find diverse terrain, from the rolling countryside to historic lighthouses on Lake Michigan to the steep dunes of Sleeping Bear Dunes National Lakeshore. The quaint village of Sutton’s Bay is home to Bahle’s, a department store dating from 1876, and a slew of galleries like the Michigan Artists Gallery, specializing in local artists and local scenes as depicted in pastels, watercolors, oils and photography. Then it’s on to the circa-1858 Grand Traverse Lighthouse at the tip of the peninsula, a white-brick lighthouse that looks absurdly small compared to the great expanse of water surrounding it. 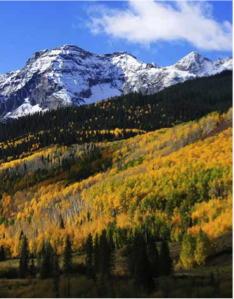 THE GOLD RUSH CONTINUES IN COLORADO but this time in the form of leaf peepers hitting the hills when aspens turn a vivid shade of gold. Add the changing leaves of the Gambel oaks and dark green cedar trees of the Plateau Valley against a backdrop of red-and-white canyon walls and you begin to understand the popularity of this road trip in late September. Take the winding 63-mile Grand Mesa Scenic Byway from the Grand Mesa Visitor Center through canyon country and the small towns of Cedaredge, Crawford, Delta, Eckert, Hotchkiss, Orchard City and Paonia. You’ll want to get out of the car at Lands End Overlook, standing 6,000 feet above the valley, and take in the glorious views of the Sneffels Range.

THE FALL FOLIAGE ROAD TRIP WAS DESIGNED with places like South Dakota in mind. Venture to Rapid City and you’ll have the chance to cruise with relatively little traffic up and down the pine forests and granite passes of the Black Hills. Highway 385 will lead you to Vanocker Canyon and Spearfish Canyon National Scenic Byway, home to waterfalls and golden aspens. Also in the Black Hills, the 68-mile Peter Norbeck Scenic Byway (a four-hour drive) travels through six rock tunnels, past towering pinnacles and over pine-clad peaks, only to arrive at the most famous sculpture in the country, Mount Rushmore. As if that wasn’t enough incentive, the 55th annual fall round-up of bison takes place Sept. 25 at nearby Custer State Park. Watch the cowboys and cowgirls drive the herd of some 1,300 buffalo, some of which will be sold at auction in November.

AUTUMN COLORS ARE NOT USUALLY ASSOCIATED with the Pacific Northwest, the land of conifers. Yet outside of Hood River, Oregon, the 35-mile Fruit Loop feels like a quintessential fall drive back east. That is, until you look up and see the lofty, snowcapped peak of Mount Hood towering 11,000 feet above. The route is lined with pear orchards, fields of lavender, alpaca farms, farm stands, wineries and an emerging hard cider scene. Sample the wares at Hood River Cider Works, Fox-Tail Cider or Hood Valley Hard Cider, and you’ll be surprised to find the crisp, refreshing drink easily pairs with the Chinook salmon and steelhead trout for which the region is known. Quaff a cider at the picnic tables behind Solera Brewery in Parkdale and be mesmerized by the spectacular view of Mount Hood.

Resorts Around the World for a Wellness Escape

Here’s Why You Should Visit Sierra Leone

Don’t be put off by a history of political instability and Ebola, there are plenty of reasons to book a trip to Sierra Leone.

All airplane flights begin on the ground. An airport is the starting point, but airspace issues continue to expand from the terrestrial to the aerial. Altitude is no barrier when countries claim sovereignty from the Earth to beyond the stratosphere.

Guatemala City is the capital of the Central American country of Guatemala. The city is known for its ties to the ancient Mayans, beautiful natural landscapes and cultural landmarks. Add these spots to your list for your next visit to Guatemala City.

Explore Sofia, Bulgaria, with the Family

Flanked by the ski resort-studded Balkan Mountains and situated directly downwind from the fragrant pine forests of the Vitosha mountain, Sofia’s gorgeous landscape and strategic location between Asia and Europe put it at a crossroads where business and pleasure intermingle effortlessly. In recent years Bulgaria’s capital city has ranked as one of the top 10 best places in the world for startup businesses, and the onslaught of new tax exemptions for businesses looking to invest in the country make it an attractive option for many corporations to begin operations within the city.