Explore Sofia, Bulgaria, with the Family

Flanked by the ski resort-studded Balkan Mountains and situated directly downwind from the fragrant pine forests of the Vitosha mountain, Sofia’s gorgeous landscape and strategic location between Asia and Europe put it at a crossroads where business and pleasure intermingle effortlessly. In recent years Bulgaria’s capital city has ranked as one of the top 10 best places in the world for startup businesses, and the onslaught of new tax exemptions for businesses looking to invest in the country make it an attractive option for many corporations to begin operations within the city.

Sofia is among the 15 largest cities in the European Union, yet it remains one of the most affordable. Many 5-star accommodations go for less than $200 a night, and dinners range from multicourse tasting menus with celebrated chefs to kid-friendly cuisine in bistro-chic outdoor spaces. People come from all over Europe to indulge in Sofia’s famous mineral waters, some of the most pristine springs in the world, yet the city offers its prized resource for free through municipal drinking fountains. The most famous are located in the park adjacent to the Central Mineral Bath building where locals line up every morning with jars and water bottles in hand to collect the hot mineral water.

Daily life in Sofia measures noticeably slower and more relaxed than life in its Eastern European sister capitals of Budapest and Prague. Spend unhurried Bulgarian mornings sipping boza (a sweetened, fermented beverage made from either millet or wheat) and savoring slices of flaky and cheesy banitsa at local cafés like HleBar, Fabrika Daga and Furna.

Over the years, Sofia’s various occupations by the Greeks, Romans and Ottomans led to a truly dynamic blend of influences impacting everything from the architecture to the cuisine. Bulgarian cuisine, rich with flavors, often focuses on locally sourced ingredients and scratch-made condiments. You’ll likely find a jar of house- made lyutenitsa — a chutney of sorts made from red peppers, tomatoes and herbs — on every table, each restaurant or home cook claiming theirs is the best, and many restaurants offer thick slices of freshly made sirene cheese (a salty, white brine cheese similar to feta) as a precursor to the meal. Turkish influences appear in the grilled cumin- and pepper-spiced minced meat kebapche or in the traditional yogurt and herb drink ayran (often called the Bulgarian hangover cure), while central European-style brandies like rakia have their own cult following in the city (sample the city’s best at Raketa Rakia Bar). Enjoy slow-roasted lamb and skewers of meat and vegetables alongside traditional dancing and music at the Hadjidraganovite Izbi restaurant, serving gingerbread sofras on hand-carved wooden plates and offering meals either blazon (with meat) or postno (without meat).

One of Bulgaria’s best-kept secrets is its rapidly improving wine industry. Finally shedding the damage from Soviet-run vineyards, the country once again produces award-winning red wines with Cabernet Sauvignon, Mavrud and Melnik grapes. Wine bars in Sofia — like Morino and Grape Central — are especially interesting as they often focus on the country’s most exclusive wines (many not available for export), serving them alongside comparable imported wines from France, Germany and Italy in a way that makes for great side-by-side tastings.

Sofia’s pedestrian zone, Vitosha Boulevard, proves ideal for lunch meetings during the day at any of the Parisian-chic patio restaurants and outdoor cafés, where people-watching is best once the high-end stores (such as Gianfranco Ferre, Moreschi, Ermenegildo Zegna and Versace) along the boulevard open. Stop in at the Greenwich Book Center to peruse hard-to-find titles in a variety of languages. Shop for high-quality Bulgarian rose products and cosmetics at the Refan & Rose store near the locally revered Memento Vitosha coffeehouse. Bulgarian roses are considered the finest in the world; the most coveted products feature rose otto, a steam-distilled rose extraction that produces the purest and highest- quality essential oil. 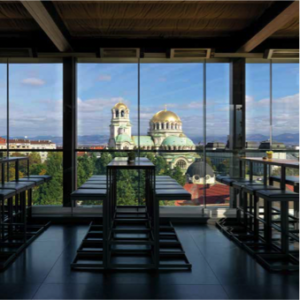 Many of the city’s best hotels sit near the Sofia Opera House and the impressive Ottoman- era St. Alexander Nevsky Cathedral — one of the largest Eastern Orthodox cathedrals in the world, featuring 200 icons throughout its impressive Italian marble, Brazilian onyx and alabaster interior. Sense Hotel Sofia, the city’s first upscale design hotel and a member of the Design Hotels group, features 71 minimalist chic rooms and suites, a spa area with an indoor stainless-steel pool and a rooftop bar looking out over Parliament and the historic buildings that line Tsar Osvoboditel Boulevard. Just a few blocks away and across from the National Art Gallery, the Arena di Serdica Boutique Hotel boasts 63 guest- rooms and one very special amenity. The hotel was built around the remains of the Amphitheater of Ancient Serdica, dating back to the third and fourth centuries. Guests can wander through and explore the ruins just as easily as they can walk through the hotel’s lobby.

Just a short 10-minute drive from the city’s center, visitors can feel away from it all, where the National Museum of History and a smattering of groomed gardens act as neighbors for the popular spa within the Earth and People Hotel. Each of the 60 guestrooms and suites of this glass-faced hotel comes with free wireless internet and access to the hotel’s fitness studio, Jacuzzi and indoor pool area. The Spa Center includes Finnish, infrared and herbal saunas; steam and Turkish baths; a vitamin bar; and a full range of authentically Bulgarian treatments from the city’s top specialists. Consider the anti-stress massage with Bulgarian rose otto oil.

The work week runs Monday through Friday, leaving plenty of time to explore outside the city with friends and family on weekends. Vitosha mountain offers night skiing on Thursdays after work during the ski season, but most skiers head up during the weekend to rent equipment in Aleko and access the gondola that reaches the highest peak of the mountain. Rustic mountain huts (hizhi) positioned along the runs offer a warm meal or drink during ski breaks and remain open during the summer and spring when hikers take to the mountain for some pristine mountain air. May and June are two of the most popular months to visit the city, as it’s when Bulgaria’s roses are in full bloom, ushering in the annual Rose Festival in the nearby village of Kazanlak. Located in the Valley of Roses, each year the village welcomes hundreds of tourists and locals making the pilgrimage to take part in the colorful folk festivities. These include trying rose liquors and jams, purchasing rose cosmetics, attending the coronation ceremony for the Rose Queen and even harvesting roses the old-fashioned way: by hand.

In a lot of ways, a rose makes a great symbol for the country’s capital city, as Sofia’s peaceful pace, beautiful cityscape and thriving business atmosphere have grown together over the years, lingering like a sweet perfume in the minds of all who visit.

Bulgaria is home to four major airports — located in Sofia, Varna, Plobdiv and Burgas — with Sofia International Airport the largest and boasting flights arriving from more than 80 major hubs including Frankfurt, Amsterdam, Milan, London, Rome and Zürich. Major airlines such as British Airways, Air France, Lufthansa, Turkish Airlines and Norwegian share terminal space alongside budget airlines like Ryanair, Wizz Air and Onur Air. Transportation is free between the two terminals at SOF, and guests can also access the newly opened metro line from Terminal 2 and be in the city in less than 18 minutes. Taxis are readily available at Ground Transportation to carry passengers throughout the city (downtown Sofia lies only about six miles from the airport), although only the taxi operator OK Supertrans AD is recommended for travelers (make reservations online).

Located among the quiet residential streets of South Sofia, this 4-star hotel features 60 guestrooms and one of the city’s top spas … complete with Turkish baths and a vitamin bar.
27 Ring Road
$$

Hadjidraganovite Izbi
This cozy restaurant celebrates authentic Bulgarian recipes and folklore songs. A whole lamb is slow-roasted and desserts are made from scratch each day.
18 Hristo Belchev St.
$$

This Hotel Rents You Some Seriously Unexpected Amenities

This Hotel Rents You Some Seriously Unexpected Amenities

Unique Decor Found in Graduate Hotels Around the World

Unique Decor Found in Graduate Hotels Around the World

Mall of America in Minnesota is already known as a tourist attraction, with its more than 500 stores, entertainment venues and attractions ranging from roller coasters to an aquarium. Next year, though, the mall welcomes a new offering to its entertainment lineup: Museum of Illusions.

Barbie’s signature color is hotter than ever as the world prepares for 2023’s Barbie-inspired movie. Bring a touch of Barbiecore to your travels by staying at these six pink hotels.

Where to Celebrate Virginia Wine Month this October

October is Virginia Wine Month, and what better way to celebrate than at one of these Virginian hotels and resorts? Consider a stay at one of these properties to enjoy the ultimate wine experience in Virginia this October.

Music lovers will find a new amenity to enjoy at Seattle’s The Edgewater: a collection of more than 24 handcrafted acoustic guitars from Orangewood Guitars.