From Julia Child and Top Chef to Anthony Bourdain and The Bear, the culinary world is an integral part of pop culture. Celebrity-owned bars and restaurants give diners an opportunity to connect with their favorite famous people. Whether you’re hoping to catch a glimpse of that star or simply want to enjoy an incredible meal, these restaurants offer unique experiences you won’t soon forget.

Robert De Niro’s Nobu has been a staple of the celebrity-owned restaurant circuit since the 1990s. Chef Nobu Matsuhisa opened his eponymous restaurant Matsuhisa in 1987 in Los Angeles. De Niro became a regular diner and suggested Matsuhisa expand to New York. While Matsuhisa originally declined, as he wanted to focus on his Los Angeles outpost, he eventually agreed. Matsuhisa, De Niro, restaurateur Drew Nieporent and investor Meir Teper agreed to a joint restaurant venture. The first Nobu opened its doors in 1994 in New York’s trendy Tribeca neighborhood. Nobu currently has more than 50 restaurants in locations around the world.

Singer Gloria Estefan and her husband, Emilio, own and operate Estefan Kitchen, a restaurant, nightclub and entertainment venue in Kissimmee, Florida. The menu boasts Cuban dishes and drinks.

Oscar-winning actress Susan Sarandon opened a chain of ping pong venues and bars, SPiN, in 2009. The first location opened in New York City’s Flatiron District. In addition to drinks, visitors can enjoy pub grub like burgers, wings and pizza. Today there are nine locations from Toronto to Seattle, San Francisco to Washington, D.C. 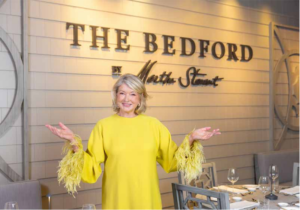 Lifestyle guru Martha Stewart recently opened her first restaurant, The Bedford by Martha Stewart. Located at Paris Las Vegas Hotel, the restaurant is a replica of Stewart’s 1925 farmhouse and serves French-inspired cuisine and her favorite recipes.

Wolfgang Puck’s Spago dominated the restaurant scene in Beverly Hills during its heyday, catapulting Puck to icon status. The restaurant remains on many best-of lists, a true testament to the quality and consistency of its California cuisine.

The Food Network launched in 1993 and since then has made many chefs household names. One of the network’s biggest success stories is Guy Fieri. The chef competed and won the network’s competition show The Next Food Network Star in 2006. Since then, Fieri has gone on to host numerous shows on the network. He owns restaurants around the country, including Guy Fieri’s American Kitchen and Bar. Beyond his shows and restaurants, Fieri demonstrated his philanthropy during the COVID-19 pandemic. Together with the National Restaurant Association Educational Foundation, Fieri created the Restaurant Employee Relief Fund, which raised more than $21.5 million for restaurant workers in need.

Fellow Food Network regular Bobby Flay has graced our screens since the mid-1990s. Flay has hosted and participated in numerous television shows and authored several cookbooks. Flay fans can visit his restaurants around the country including Amalfi by Bobby Flay and Bobby’s Burger Palace.

Celebrity chef Cat Cora, known for her appearances on Iron Chef, has opened more than 18 restaurants with a focus on health, wellness and sustainability. Travelers have likely seen Cat Cora’s Kitchen, located in airports throughout the United States.

Emeril Lagasse became a household name thanks to his cooking show catchphrases including “Bam!” The James Beard Award winner owns multiple restaurants, including several in New Orleans, highlighting his mastery of Creole and Cajun cuisine. 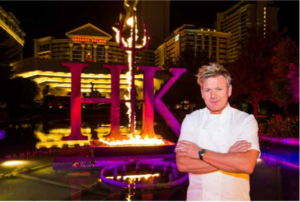 British celebrity chef Gordon Ramsay might be best known for his colorful language and fiery temper. However, fans of his television cooking competition show Hell’s Kitchen might not realize Ramsay’s restaurants hold multiple Michelin stars. Ramsay owns several restaurants in the United States and the United Kingdom, ranging from fast casual to the 3-Michelin-starred Restaurant Gordon Ramsay in London.

Bravo’s cooking competition series Top Chef introduced viewers to a new group of rising chefs. Many contestants and winners have gone on to open restaurants, write cookbooks and appear in other television programs.

Chef Stephanie Izard was the first female chef to win Top Chef. Since winning the title, Izard went on to open several restaurants, including Girl & the Goat, and win a James Beard Award in 2013 for Best Chef: Great Lakes.

Top Chef finalist Nina Compton appeared on the show’s New Orleans season. The chef fell in love with the city and opened her own restaurant there: Compère Lapin. The restaurant pulls from her Saint Lucian roots while also highlighting the local cuisine. Compton won a James Beard Award for Best Chef: South in 2018.

The British baking competition The Great British Bake Off delights viewers with its charming contestants and delectable baked creations. While many of the popular contestants and winners go on to publish cookbooks, fans of the show can sample one winner’s desserts firsthand. Series 7 winner Candice Brown co-owns The Green Man pub in Eversholt, England, with her brother. The pub serves classic British fare alongside desserts made by the star baker herself.

Use these restaurants as your guide to create an itinerary for a star-worthy taste on your travels. Bon appétit!

Whether you are interested in music, art, history, food, sports or fashion, Music City has something for everyone to sing about. Nashville is accessible, friendly and authentic, with diverse neighborhoods, a storied musical heritage and a creative culture that energizes the city.

You No Longer Need a Reservation at Yosemite, Starting Summer 2023

It’s no secret visitation to national parks soared over the pandemic. With larger crowds came necessary measures to stem the flow of excess guests. However, in 2023, one of those measures will finally be lifted at Yosemite National Park.

Known for its large naval base and coastal cuisine, Norfolk, Virginia, might surprise visitors with its lively art scene in the NEON district. Short for New Energy of Norfolk, NEON serves as a creative cultural center in downtown Norfolk, drawing locals and tourists to take in its bold murals, peruse Chrysler Museum of Art and enjoy nights at the opera or comedy theater.